Ethan stood over me and shook the remaining ice in his coffee mug nearly drained of its whiskey. “There is a party going on here, Merci. In our honor.”
I couldn’t stop reading the mayor’s deposition the DA’s assistant had faxed me—totally off the record. My anger churned, another storm brewing on my horizon, or perhaps it was only the echoes of this last tempest. “He’s denying Cartwright Construction offered him bribes. I mean, we found proof and he’s still lying.”
Ethan sighed and sat on the corner of my desk, stretching his long legs out before him. “We got Cartwright. The Mayor is three seconds from going down himself. Let the police handle it.”
He snatched the faxed pages from my hand and replaced them with my untouched mug of celebratory whiskey, which had been sitting forgotten on the desk. I studied the navy blue cup that read “World’s Best Partners” and chuckled. The matching set had been a congratulatory gift from Emily, his wife, after we landed our first eight inches above the fold. The Cartwright bribes were just the latest in our long history together.
Which is why I knew that he would understand.
“There are some things learned best in the calm, but most are learned in the storm.”
Ethan rolled his eyes at my Willa Cather. “It’s a party, Merci. Take three seconds to appreciate what you’ve done.”
“Correction: what we’ve done,” I said as I leaned back in my chair. “Without your picture of the mayor’s tan line from his watch, I wouldn’t have thought to even raise a question about his family vacation to Hawaii.”
“But you were the one who cracked the travel agent, got her to admit that Cartwright was the one who booked and paid for it all.”
“And the rest is front page.”
“Above the fold.”
I grinned at that accomplishment and took a whiff of the cheap whiskey our boss had bought for the celebration. “Hayne’s got the good stuff in his office. You know that, right?”
“Yeah, but it’s an office party. Isn’t the liquor supposed to be cheap as long as the company is good?” He lifted his mug toward me for a toast. “To staying out of trouble?”
I clinked mine against his. “To staying out of trouble.” 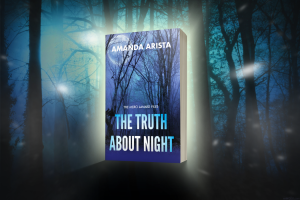 The Truth About Night
by Amanda Arista
Genre: Paranormal Mystery

As an investigative journalist, Merci Lanard has an uncanny knack for getting the truth out of people, a talent she uses to expose the real story behind her city’s most gruesome crimes.

Until one night, when her partner, Ethan, is killed.

Reeling from shock and grief, Merci vows to track down his murderer. As she starts digging, she meets Ethan’s estranged brother, Rafe, who agrees to work with Merci to find his brother’s killer. She soon discovers Ethan had been hiding things from her, mainly that he was a Shifter and had a whole life in a supernatural world she knew nothing about.

A Shifter himself, Rafe introduces Merci to magic she never knew existed. As they work together to uncover hidden connections between Ethan’s murder and a series of strange dead bodies, they find themselves in the crosshairs of a turf war for the soul of the city.

Amanda was born in Illinois, raised in Corpus Christi, lives in Dallas but her heart lies in London. Good thing she loves to travel.

During the summer after second grade, she read every book in the young adult section of the library, much to the surprise of the local librarian. So she started making up her own stories and hasn’t stopped.

She has a husband who fights crime, one dog who thinks he’s a real boy, and another who might be a fruit bat in disguise. She recently added a tiny human to the mix who is following in her mother’s footsteps of storytelling.
Along with her BA in English & Psychology and her MA in Education, Amanda is a graduate of the SMU Creative Writing Program and now teaches other aspiring authors. She has delivered lectures at several writer conferences and loves discussing craft, character, and structure. Her current favorite: Stirring up Trouble with Romantic Subplots.
She is represented by Kimberly Brower, of Brower Literary & Management.

Random Facts:
Amanda is adopted and loves to share that story with others to promote adoption.
Amanda has a collection of turtle figurines that collects on her travels.
Amanda has a strange love of cheesy horror movies. She prefers demons and witchcraft to slasher films.
Amanda is a really good bowler and completely rocks at croquet.